The share of the world’s population in extreme poverty — subsisting on less than $1.90 a day, adjusted for inflation and cost of living across countries — has plummeted from 42 percent in 1981 to 10 percent in 2015. Poverty fell not only proportionally but in absolute terms as well: The number of people in extreme poverty fell by 1.17 billion between 1981 and 2015, even as the global population grew by almost three billion. The reduction was driven in large part by the fast-growing economies of Asia, in particular, China and India.

But decline of poverty in those countries has fed an erroneous belief in the West that economies rising into middle-income status are on track to end extreme poverty and no longer need assistance — and that major donors need to focus on the fragile and conflict-ridden countries left behind.

This redirection of global aid risks neglecting the hundreds of millions who may never escape poverty despite living in countries that are becoming relatively rich.

Bill and Melinda Gates, whose yearly contributions to international development exceed the aid budgets of countries like Canada and Norway, have argued that “as extreme poverty disappears from many places, including China and India and, increasingly, many countries in Africa, it gets more and more concentrated in the most challenging places in the world” — mainly in sub-Saharan Africa.

Britain in 2015 committed to devoting 50 percent of its aid to “fragile states and regions.” And the 2017 replenishment of the International Development Association, the World Bank’s fund for least-developed countries, doubled the bank’s financing for such countries to $14 billion over three years.

China, India, Nigeria and several other countries still have huge populations of poor people and have become more unequal as they have grown. This has created two concentrations of poverty in the world. 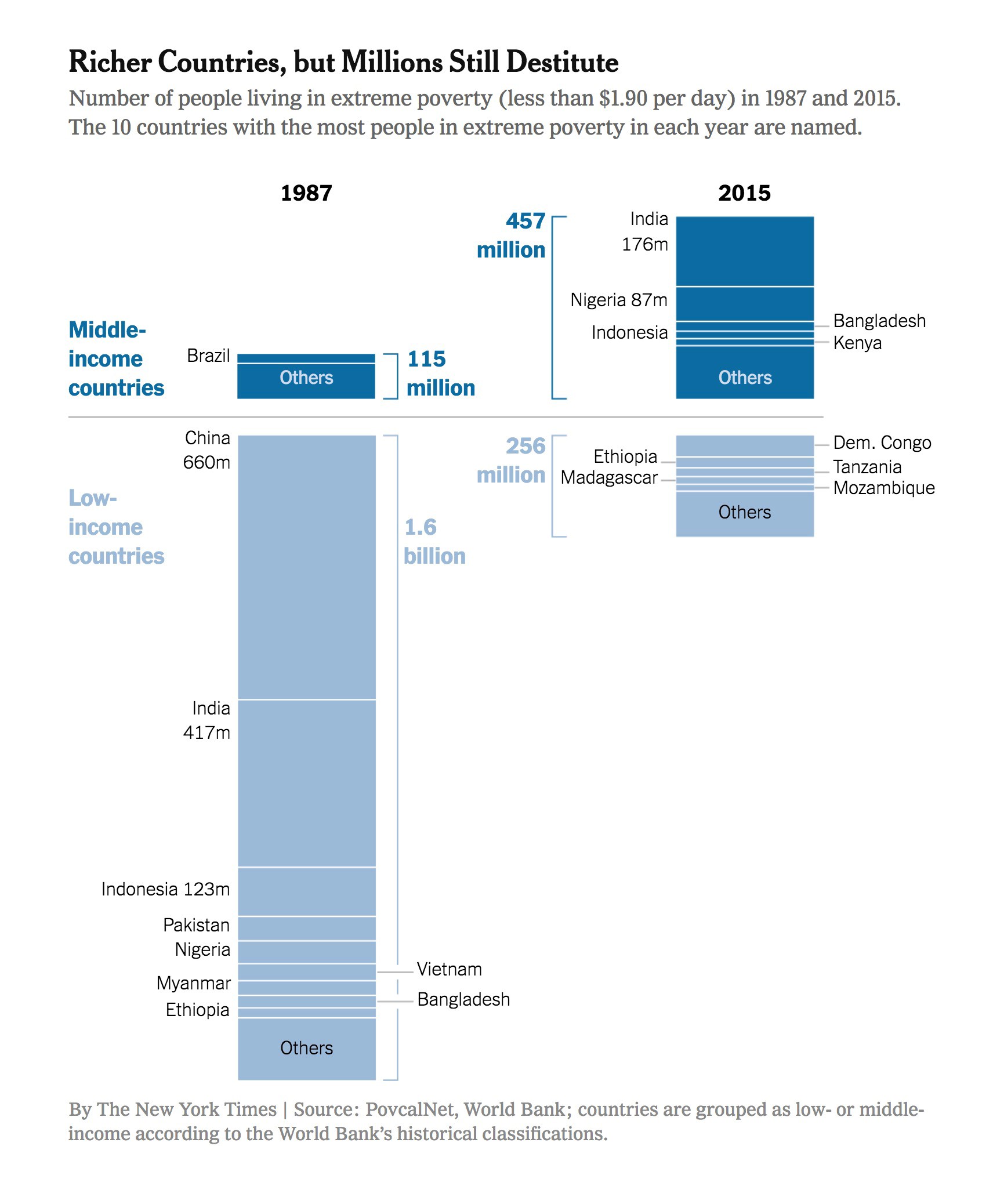 Conflict, inequality and weak institutions may cause growth to reverse, as in Yemen, which since 2015 has slipped from the ranks of middle-income countries. But poverty reduction propelled by economic growth, as in China, may also be running out of steam. This growth was rooted in low-skilled laborers moving out of agriculture and into manufacturing industries bolstered by high global demand and trade.

Now, manufacturing is on the decline and automation is spreading in rich and poor countries. From 2013 to 2015, total employment in India, for instance, shrank by seven million, more than Illinois’s entire civilian labor force of 6.5 million.

Aid doesn’t reach the majority of the poor because the middle-income countries they live in either never received much or have outgrown eligibility.

India and Nigeria, the countries with the two largest populations of extreme poor in the world, received nearly the lowest net aid per poor person among all aid-receiving countries in 2016. India got about $15.25 per poor person; Nigeria, $28.90. But the average low-income country containing more than 1 percent of the world’s poor in 2015 got $107.80 per poor person. China, which has 10 million extremely poor residents, and Indonesia, with its 19 million, were net aid donors.

This confluence of factors has created a large, and largely invisible, poor population spread across low- and middle-income countries, out of the reach of growth and, often, aid.

The end of aid in high-poverty middle-income countries would not be a problem if these countries could take care of their citizens. But these governments are often slow to redistribute income to the poor for two main reasons: problems of capacity and problems of will.

Rich countries have solved a lot of the problems that undermine tax capacity. A goal for donors who aim to end poverty should be not only to help victims of war and famine but also to increase the tax and redistribution abilities of high-poverty middle-income countries by working with governments to increase data capacity, train staff members and put in place mechanisms to minimize graft. That could be the most effective way to reach the people who endure life at subsistence level.

Problems of will may be even harder to solve. Often politicians spend resources on projects that seem frivolous given the high rate of poverty in their country and that could be justified only through complex, trickle-down reasoning. The Indian government’s space program is one example; Rwanda’s nearly $40 million sponsorship of the Arsenal soccer club last year is another.

Problems of will also arise when leaders are more responsive to certain groups of citizens than others. Our analysis of Indian data shows that growth benefits upper-caste Hindus before others: From 1987 to 2011, the share of India’s extremely poor people who were Muslim or lower-caste Hindus rose to 55 percent, from 46 percent. Indian Muslims also benefit less, on average, than other socioreligious groups from the broadening access to education.

In Brazil and South Africa — two other middle-income countries with large poor populations — there is evidence that growth is as unequal along racial lines as it is along caste and religious lines in India. And the problem of unequal distribution is, of course, by no means confined to high-poverty middle-income countries: Research shows that when aid arrives in low-income countries, it often reaches elite groups first.

The temptation for donors is to focus on the poor in the most wretched, conflict-ridden countries and reach them directly through philanthropic and nongovernmental organizations, bypassing messy, corrupt governments. This practice is appropriate in some cases — for instance, when delivering humanitarian aid. But that type of aid will not create systems for the invisible poor to have a voice in their countries in the long term.

Solving problems of will requires giving the poorest citizens information and the political heft to hold their leaders accountable. That is best accomplished by strengthening democratic institutions. Poverty is political: Solving problems of will, like problems of capacity, requires rolling up our sleeves and working with the governments in the countries where the poor live to redistribute not only income, but also power.

Rohini Pande is a professor of public policy and a co-director of the Evidence for Policy Design initiative at Harvard, for which Vestal McIntyre is a staff writer. Lucy Page is a doctoral student at the Massachusetts Institute of Technology.

This article originally appeared in the New York Times and was republished with permission.