Four months ago, new mom Mileidy was having trouble breastfeeding her 3-month-old daughter. Her daughter’s irritability and frustration made Mileidy worry that her body could not produce enough milk to feed her hungry baby. She was anxious that she may need to use infant formula instead, a product she could not afford. Luckily, Mileidy had a breastfeeding champion around to ease her fears: her brother, Ronal.

“I explained to Mileidy that when mothers are stressed, they do not produce enough and quality milk. For this reason, I asked her to show me how she was doing the process, and when she did, I noticed that she was not breastfeeding the baby in the right way.” Because Mileidy was not positioning her baby correctly, her baby was not getting enough milk.

At just 25 years old, Ronal Velásquez Roblero has become a key educator and promoter of optimal breastfeeding practices within his community because he wants to see improvements in health, education and nutrition. Ronal explained to Mileidy and her partner, Lino, that the issue was not a lack of milk, but that the baby was not attaching to her breast correctly. He showed them proper breastfeeding attachment techniques, and Mileidy was quickly able to stimulate enough milk production to satisfy her daughter’s needs.

Ronal and Mileidy live in western Guatemala, in the municipality of Sibinal, where nearly 60 percent of children under 5 years old suffer from chronic malnutrition and food insecurity is prevalent. For the past year and a half, Ronal has been part of La Red de Hombres (National Network of Men), a civil-society advocacy organization that fosters male engagement in improving Guatemalans’ health, education, nutrition and gender equity, as well as eradicating violence against and exclusion of women. Through a USAID-funded course, Ronal learned about the importance of breastfeeding and how promoting exclusive breastfeeding for the first six months of life followed by appropriate complementary feeding ensures that children receive the best nutrition during a critical period of growth and development. He was motivated to educate others about all he had learned, starting with his own family.

“My niece is now 7 months old; she is being breastfed, and I put into practice my knowledge,” explains Ronal. “With this, we have avoided spending on infant formula, because the family does not have sufficient incomes to sustain this cost, and my niece is well nourished.” 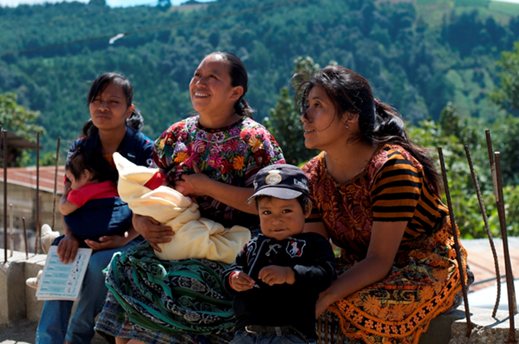 Mothers sit with their young children during a breastfeeding training at a local health center in Guatemala. Photo: Peace Corps Guatemala

Early Impact for Long-term Results
In Guatemala, sub-optimal infant and young child feeding practices are common, as is pregnancy during adolescence, with Guatemala facing the highest rates of teen pregnancy in all of Central America. Only 63 percent of women put their baby to their breast within the first hour of life, and just over half of children under 6 months of age are fed only breast milk. With nearly half of Guatemala’s population under the age of 18, USAID has identified youth as a key influencer for improved health and nutrition.

Through educational sessions, USAID teaches youth and young adults, like Ronal, about the importance of proper health and nutrition behaviors, including the benefits of breastfeeding. USAID works to enhance the skills and capacities of civil society for advocacy, policy dialogue and accountability, in addition to getting more youth involved in civil society organizations and advocacy.

By improving the rates of exclusive breastfeeding in countries like Guatemala, USAID helps children get the best start to life and fosters optimal physical and mental growth and development, resulting in improved productivity later in life. These actions lead to more healthy, productive individuals, families and communities as well as stronger economies and more self-reliant societies.

This article originally appeared on the USAID website and was republished with permission.

Palladium implements the Health and Education Policy Plus (HEP+) project for USAID. HEP+ focuses on health sector reform and central-level planning and policies for education, nutrition, and health in Guatemala. The project supports civil society to undertake advocacy and accountability efforts and promote policy dialogue between stakeholders at national, departmental, and local levels.