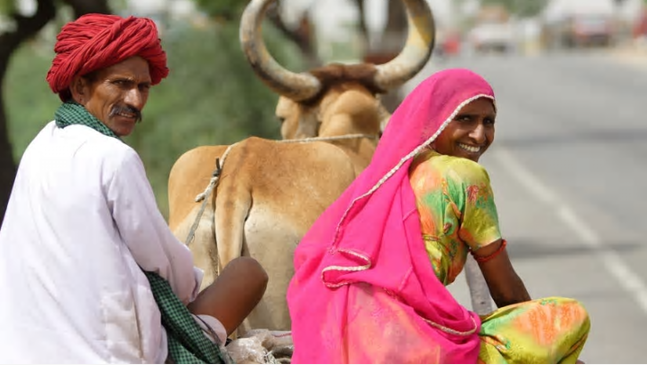 A man and a woman in Rajasthan, India. Photo by: DFATÂ / CC BY

The platform supports development and economic growth in fragile and emerging markets, while also building a gap between aid and wider foreign policy in DFAT.

On Nov. 22, Australian foreign minister Marise Payne announced new funding of 1.9 million Australian dollars ($1.4 million) that will be invested into India — part of the first country-specific Business Partnership Platform round — despite Australia not having a bilateral aid program with the country.

With India considered an important market for Australia’s economic future, there is a strong desire to invest in reducing economic risks, such as gender and economic inequality.

India’s business partnership projects
Four partnerships were awarded funding — economic development and gender were an important focus in each:

Improving health outcomes for underserved communities in rural Rajasthan brings together Karma Healthcare and the Smile Foundation to improve awareness of primary health care services available to these communities, as well as reduce financial barriers to health care. Women will also be supported with education to help themselves and their families, as well as through mobile nurse assisted e-doctor clinics, making health education and care more accessible.

Redefining markets for female poultry farmers in rural Madhya Pradesh brings together the Madhya Pradesh Women Poultry Producer Company and Intellecap to improve the incomes of women poultry farmers. Poultry is a fast growing area of Indian agriculture and by building a poultry processing facility, this partnership hopes to create a new market for female producers, leading to improved profit margins and increased incomes.

Improving access to reliable electricity in villages in rural Andhra Pradesh brings together Village Energy and the Rural Development Trust to provide 1,200 households with a smart device connecting homes to a software platform that will manage a microgrid. It aims to improve the reliability of the electricity supply as well as reduce the cost of electricity production and distribution through renewable energy, artificial intelligence, software, and blockchain technologies.

Each of the partnerships helps expand upon existing initiatives, with DFAT funding part of the projects, the rest is contributed by partners. The funding allows initiatives to move faster or invest in areas that may have taken longer — including infrastructure, systems, and support networks that help projects scale beyond a few communities.

How the platform extends beyond the aid program
The recipients of the Business Partnership Platform funding round were announced alongside new initiatives to boost economic ties with India.

“They will promote business-to-business relationships between our two countries while contributing to inclusive economic growth,” foreign minister Payne said, calling the platform a “flagship initiative of the Australian government.”

Payne said the initiative directly tied in with the “India Economic Strategy to 2035,” a report released earlier this year to provide recommendations on how Australia could grow export and market opportunities in India. Risks to India’s economic growth include poverty, gender inequality, climate change, and water scarcity, according to the report, which Australia could support through investment, research, and partnerships.

Despite ties to the India Economic Strategy, Payne described the platform as strongly tied to development objectives and said it was important to build private sector awareness of its ability to contribute to the SDGs.

On the ground, the projects are focused on delivering change where communities need it most.

Alexie Seller, CEO of Pollinate Energy, explained to Devex that Pollinate Energy’s focus is on ensuring women in remote communities become empowered economically: “A big piece of the BPP proposal for us was to formalize the upscaling process allowing women to sell energy friendly products.”

“We need to give them a clear training package and have an understanding of what a woman needs when she first enters the market.

“Upon entry, we work with women selling low-cost products and build them to higher sales point, and that requires a lot of hand-holding. But it’s how we get as many people as possible coming up the ladder with us,” Seller said.

Time management, cash planning, and loan management are all part of the skills and training provided as women move up the ranks. For Pollinate Energy, the funding not only helps formalize its process, but the partnership with DFAT also opens opportunities to scale.

“DFAT can help us to build networks and opportunities,” Seller said. “It can provide links into the Indian government as well as connections to Australian companies working in India. And being associated with their name on grant applications also assists greatly. We’ll be looking to leverage that to benefit those that need it the most.”

This article originally appeared on Devex and was republished with permission.