Get inspiration in your inbox
with our monthly newsletter.
SUBSCRIBE
Dulce Pedroso | Palladium - Apr 26 2019
From 2% to 92%: Preventing an Epidemic in Nigeria
in-depth
Share

The BBC has interviewed Dr. Kabir Aliyu, responsible for the campaign that has increased immunisation rates in one Nigerian state from 2% in 2017 to 92% today, with the support of the UK aid funded MNCH2 programme. Listen to it here.

In July 2017, there were rumors that in a village of Gidan Dugus, 30 kilometres from the Primary Health Care Development Agency in Nigeria’s Jigawa State, children were dying from a mystery illness. Three months later, when the reports reached the newly appointed Executive Secretary Dr Kabir Aliyu’s office, 44 lives had been lost. The story was all over the national news: “How can people be dying and our surveillance system not pick it up?”

Only three years earlier, Nigeria had by the skin of its teeth avoided the catastrophic Ebola outbreak that devastated its West African neighbours. And yet, the community disease surveillance system in Jigawa, one of the poorest states in Nigeria, was clearly not fit to respond to even more common epidemics, including what they later confirmed to be a malaria epidemic in Gidan Dugus.

The death toll in Gidan Dugus might have been lower if people had gone to a health facility. Instead, they visited pharmacists. There was little engagement between the 700 health facilities and the 12,000 villages they were built to serve. It was no surprise then when the 2017 Nigerian National Demographic and Health Survey revealed that only 2% of babies in Jigawa had been vaccinated against preventable diseases. The Primary Health Care Development Agency in Jigawa called a public health emergency. Under the watch of Dr Aliyu, the agency embarked on a mass immunisation program, along with UNICEF, the World Health Organisation, and the UK aid-funded Maternal and Child Health (MNCH2) program.

Sometimes health workers would arrive in a village only to find its people had disappeared to work in the fields for the day. Parents would frequently fail to bring their infants to the health facility – which could be more than 10 kilometres away – for their follow-on vaccination doses. And health workers were often unable to keep up with new births.

To be effective in the long-term, communities would have to ‘own’ health interventions. Religion and tradition run deep in the lives of the largely Muslim communities in northern Nigeria, so to win people’s trust, the agency decided to call on traditional and religious leaders for help. This was the birth of the ‘Jakadan Lafiya’, or ‘Health Ambassadors’.

The agency asked the traditional and religious leaders to appoint local volunteers to be Health Ambassadors to act as a bridge between the 12,000 communities and the health facilities. The selection criteria were relatively simple: the Ambassadors had to be trusted by the community members, live in the same village, and not be affiliated with any political party. Ideally, they would also know how to read and write. 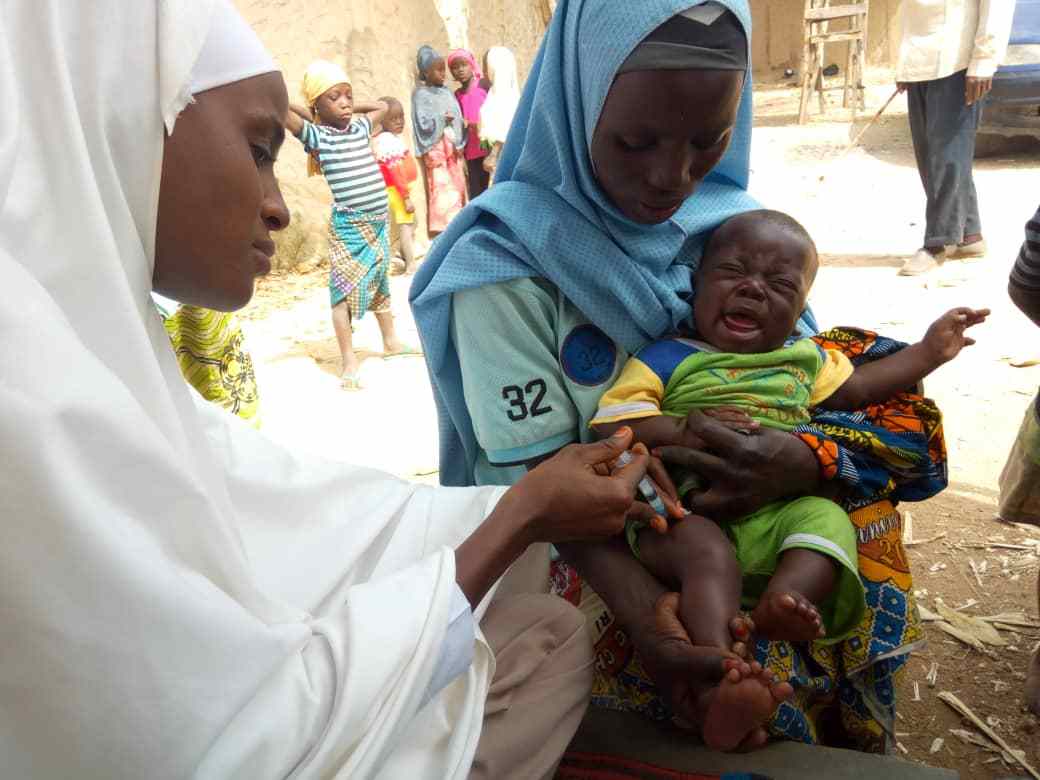 The Jakadan Lafiya are helping connect families with health services, including basic immunisations, provided by the government. Source: MNCH2

After being selected, the Health Ambassadors attend a basic orientation day and their contact details put up in each health facility. Their role is to carry out disease surveillance, maintain birth registers and report maternal deaths to the health facility, and coordinate all health interventions in their communities.

Seventy percent of the Ambassadors volunteers are village heads, but they can also be other prominent community members, such as barbers. Almost all (95%) are men. But because men may not hear about family matters that are kept private – such as a pregnancy complications – they work closely with women’s groups and traditional birth attendants.

How Naming a Baby Protects Against a Preventable Illness

Bashari Galadima started officially working as a Health Ambassador in Gidan Dugus earlier this year. He is also the village head responsible for important community rites and celebrations, including baby naming ceremonies. Before deciding what to call a baby, he calls the health centre.

“On the day of the delivery, I send the family to the health facility, so that the doctor can immunise the child,” he explains. “[After the naming ceremony] I take the child’s name to the doctor for him to record. After four weeks, we crosscheck registers to see if those that have been registered have returned for their follow-on dose. The ones that haven’t returned, we follow up to find out why… The ones that resist the registration initially think that something bad may happen, but we overcome this by explaining it to them.”

Khadija Magaji is a 15-year old mother of two whose son was the first baby to die during the malaria outbreak in Gidan Dugus. The baby came down with a fever, and by the time the family got to the hospital, his condition had deteriorated. But since the epidemic, both of her younger children have been vaccinated. In a region where diseases such as measles or polio are still present, parents are quick to make connections between immunisation and the general wellbeing and development of their children. “We really see the importance of these vaccines,” Kjadija says. “Your child will crawl and walk without any issues.”

Immunisation coverage in Jigawa has already reached 92%. The Primary Health Care Development Agency believes that the Health Ambassador initiative has also improved disease surveillance - there hasn’t been a day when the health facilities haven’t received new information from a village. Sometimes, they pass this on to other government authorities. “We get reports about fire accidents, collapsed wells and disorderly camel riders,” Dr Aliyu says.

The government of Jigawa is committed to meet the demand for quality health services, and under the leadership of Dr Aliyu, there is hope: “The Jakadan Lafiya is still in its infancy,” he explains. “It’s a local effort, and we will get things wrong. But nothing is cast in stone, and we believe we can transform our health outcomes, like we have already done with immunisation.”

Meanwhile, in Gidan Dugus, there hasn’t been a single disease outbreak since the epidemic nearly two years ago.

MNCH2 is funded with UK aid from the British people and is managed by Palladium. MNCH2 has invested £80 million in improving maternal and child health outcomes in northern Nigeria and has already helped vaccinate almost five million children against killer diseases. Dr Aliyu was interviewed by the BBC about this success on 26 April, during World Immunization Week.