Get inspiration in your inbox
with our monthly newsletter.
SUBSCRIBE
Anna Lisi | Palladium - May 16 2019
How "Citizen Hearings" Can Improve Maternity Care
in-depth
Share

On an average day, 15 women in Mponela, Malawi give birth in a health facility with just three beds. Palladium's Anna Lisi describes her experience working with citizens to find solutions to improve midwifery and maternity care.

During a "citizen hearing" in 2016, community members in Mponela, a town in the district of Dowa, Malawi, gathered to discuss issues at the town’s health facility, specifically its maternity ward.

Abuse and disrespect by some of the midwives had been reported at the hospital, discouraging women from coming to the facility to give birth. Just one example: a lack of beds left women no choice but to give birth on the floor.

Two years later, there had been a turnaround, due in part to the Health Policy Plus project (HP+), which works to strengthen health policy at the global, national, and subnational levels to improve health outcomes worldwide.

In 2018, I visited the town and spoke with village chiefs, religious leaders, midwives, and others in the community about how the hearing and assistance from USAID helped them understand these issues and how it brought them together to address the problems.

White Ribbon Alliance for Safe Motherhood-Malawi (WRA), an HP+ partner, organized the citizen hearing, which brought to light some of the changes needed at the facility. Too few staff who were overworked and poor working conditions were major issues affecting health worker attitudes.

After the hearing, one midwife was replaced and an additional midwife was assigned to the facility to help lighten the workload. On an average day, 15 women give birth at the facility, although there are only three beds available at a given time. 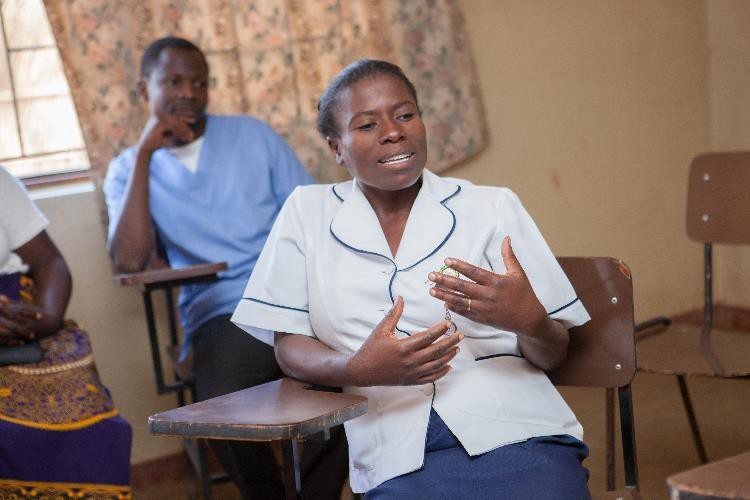 They also donated solar lights so that women no longer had to pack candles for the trip to the hospital ahead of giving birth.

Chifuniro Ndelemani, the senior group village head, continues to work hand-in-hand with HP+/WRA to address issues at the facility in Mponela. She says that since the citizens' hearing, there are no longer issues of abuse and women are encouraged to attend the facility to give birth.

Through HP+/WRA support, health workers were held accountable for providing quality and respectful care, citizens were given the opportunity to speak up and take action, and community trust was strengthened for better health outcomes for mothers and babies. And, through the efforts of women like Chifuniro and the midwives they support, USAID helped more than 8.7 million women worldwide give birth in a health facility since 2012.

Anna Lisi is Managing Editor on the USAID- and PEPFAR-funded Health Policy Plus (HP+) project, implemented by Palladium. For the past 10 years, she has worked in the intersection of international development and communications covering issues related to health policy, nutrition, HIV, and maternal and child health.

This article originally appeared on Medium by USAID and was republished with permission.