Get inspiration in your inbox
with our monthly newsletter.
SUBSCRIBE
Rosanna Duncan | Palladium - Feb 18 2020
How You Measure Your Gender Pay Gap Matters
opinion
Share

“What gets measured gets done”, goes the old saying, and gender equity is no exception. Companies in the top quartile for gender diversity are 15% more likely to have financial returns above their respective national industry medians, and yet the best way to measure the gender pay gap is still up for debate.

Many companies simply measure pay between men and women as an average across all jobs. They calculate the average annual salary for women, and then compare it to the average for men. Most discussions about the gender pay gap use this method – and it’s no wonder, as it’s so straightforward.

But when we balance the books with this over-simplified calculation, we risk missing the root causes at play, and obscuring inequalities that can have huge consequences for the business. An average doesn’t tell us when there are actually increasing numbers of women in leadership roles and higher paid occupations, or why the women in lower-paid positions can’t move up. An average also overlooks individuals of either gender from lower socio-economic backgrounds who are only working part-time because of caring or other responsibilities. The gender pay gap is too complex to measure so simply, and we’re missing crucial details to help us fix it.

These issues are exacerbated for global organisations who operate in multiple currencies and across different markets, where wages can vary significantly.

This is why I’m an advocate for measuring “equal pay” using the compa-ratio method, which compares directly between men and women in the same salary band by calculating the difference in salary relative to the band’s midpoint. 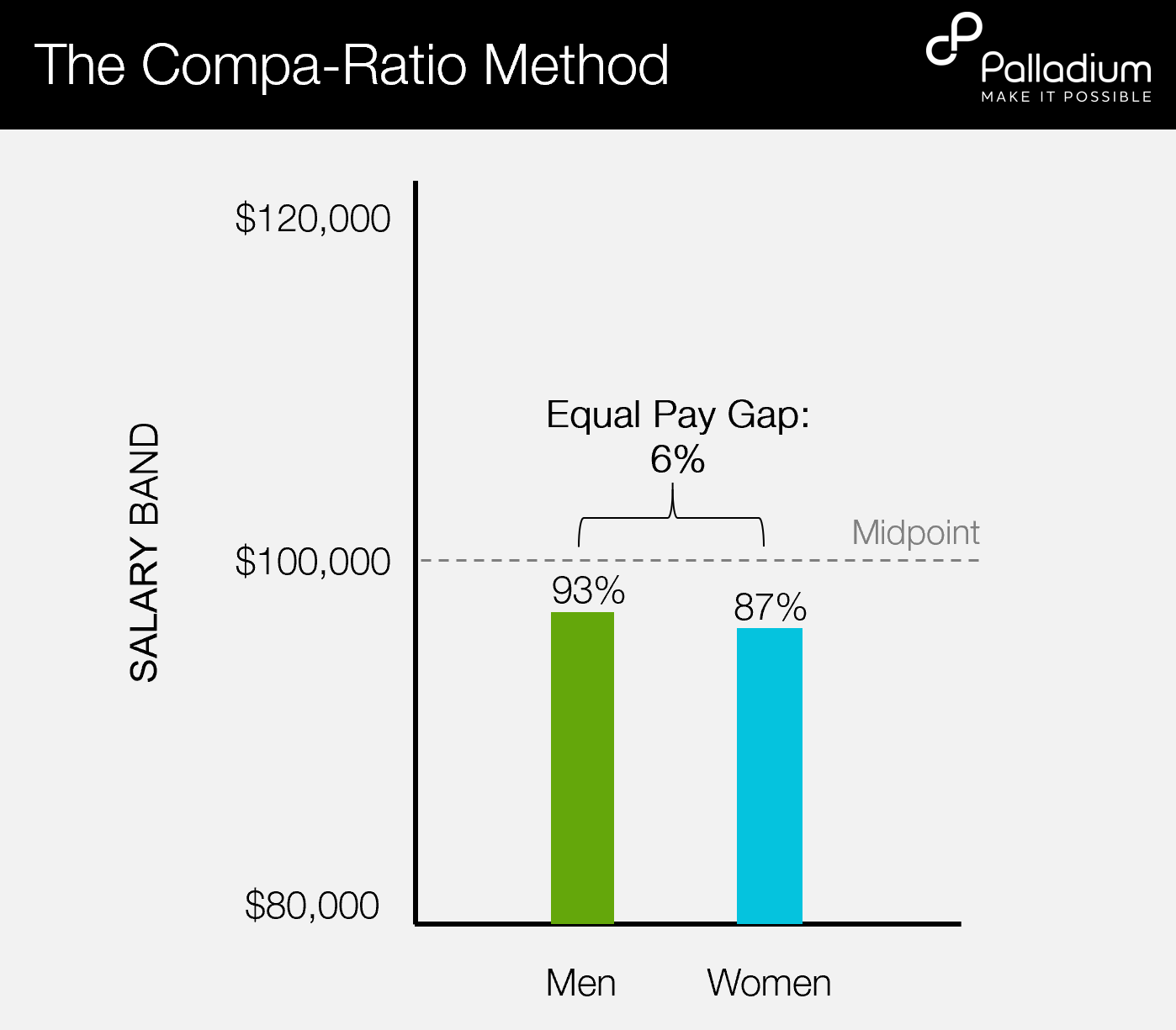 By looking at how people are paid for the same work, we can better identify trends and anomalies within each salary band and take action. We can also make global comparisons that wouldn’t be possible if we simply converted averages to a given currency. Equal pay gives us a tangible next step towards closing the gender pay gap; it just takes a bit more effort.

As Chief Diversity Officer for Palladium, a global impact firm with operations in over 90 countries, I advocated for use of this method in 2017. At the time, our global equal pay gap was as high as 21% in some parts of the business. We set KPIs to reach a gap of less than 10% in 2018, and less than 4% the following year, and every year we’ve exceeded our targets and had to set new, more ambitious ones. I credit the compa-ratio method with giving us the data we needed to identify the areas in most need of improvement and target them directly.

It bears mentioning that equal pay is, of course, just one piece of the inclusion jigsaw. Women are not a homogenous group; gender parity does not equal diversity or inclusion when women are only being recruited and promoted from the same privileged backgrounds as their existing male counterparts.

Diversity of thought – and the business benefits that come along with it – requires a far more intersectional approach. Recruitment practices, selection criteria, and unconscious bias all play a role in preventing a two-tiered system, where some women are given opportunities, and those from lower socioeconomic and other minority backgrounds are not.

By measuring equal pay, we can better take action to correct not only the pay gap, but also begin to address other types of inequality and challenges for creating diverse and inclusive companies.

Contact diversity@thepalladiumgroup.com to take diversity and inclusion at your organisation to the next level.