Get inspiration in your inbox
with our monthly newsletter.
SUBSCRIBE
Gifty Tetteh and Polly Hodgkins | Palladium - Dec 01 2018
Prince Charles Learns How Cocoa can Contribute to Climate Change
news
Share

Cocoa is the single largest commodity driving deforestation. Palladium's Gifty Tetteh and Polly Hodgkins write about Prince Charles' visit to a cocoa farm in Ghana, part of Palladium's Partnerships for Forest project, to learn how to solve this challenge.

On a usual Sunday, most people in the Kona community in Ghana would be at home with their families. But on November 4th, 2018 the community hosted a special guest, Great Britain's Prince of Wales Prince Charles. Traditional authorities and community members thronged the farm cladded in their best apparel to welcome Prince Charles to the community. He was greeted by representatives from the UK's Department for International Development in Ghana, the Palladium-managed Partnerships for Forests (P4F) programme and the Chief of Kona.

In collaboration with DFID, P4F organised a cocoa farm visit for Prince Charles to witness first-hand the cocoa production chain, and to interact with women’s groups and smallholder cocoa farmers to get a sense of the challenges they face. Additionally, P4F facilitated a Cocoa & Forest Initiative (CFI) Roundtable where Prince Charles interacted with business leaders and CEOs of global chocolate companies such as Hershey, Nestlé, and Touton to discuss the deforestation-free cocoa agenda. 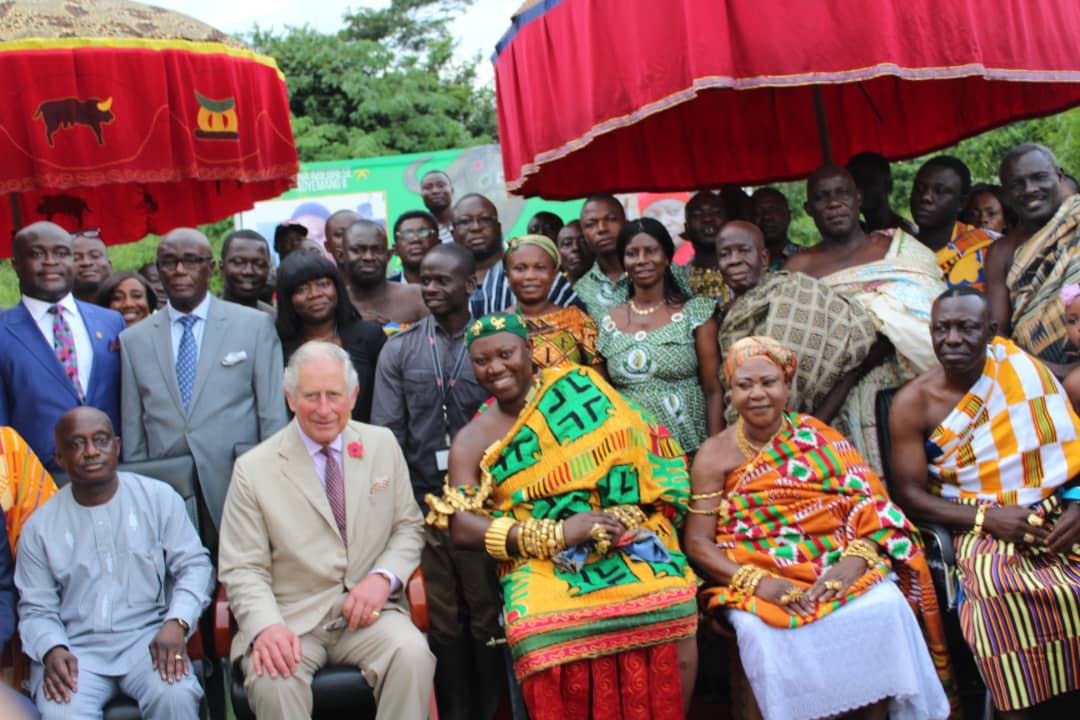 Why a Cocoa Farm Visit?
Prince Charles' visit is a testament to the collaborative effort of the UK government to tackle deforestation and climate change through its Partnerships for Forests (P4F) programme.

Over a quarter of forest conversion to agriculture is the result of cocoa expansion, rendering it the single most important commodity driver of deforestation. Ghana, alongside Cote d'Ivoire, are the leading producers of cocoa, and both countries account for over three million smallholder farmers who produce about 70% of the world's cocoa and depend on the forest for their livelihoods.

Ending deforestation in the cocoa supply chain has become crucial to achieving a host of global goals, including preventing climate crisis, sustaining rural livelihoods and preserving natural biodiversity. Smallholders play an important role in responding to deforestation and climate change and mitigating its impacts, especially through forest-related activities.

Smallholder Farmers Contribute to the Deforestation-Free Agenda
During his visit to Kona, Prince Charles toured the cocoa farm accompanied by its owner, Mr. Agyin Brefo, Kona's Chief and Victoria Wiafe, P4F West and Central Africa Regional Manager. He was shown different varieties of cocoa trees, pods, and beans, including one the community farmers had named after his mother Queen Elizabeth. An Agricultural Extension Officer simulated the artificial pollination process while a team of women and men showcased the harvesting and pod breaking process.

"I would urge the youth to intensify good agronomic practices to boost production and eschew the mindset that farming is only for the poor, aged and uneducated,’" Agyin said.

Agyin shared with Prince Charles the process of fermentation to produce tasty chocolate. An element prior to this is the removal of the placenta from the cocoa pods which is traditionally done by women.

Palladium, through P4F, facilitates the creation of partnerships between the private sector and the public sector and communities to deliver on commitments for deforestation-free commodities such as cocoa, reduce the pressure on forests, and improve livelihoods.

There is no one-size-fits all solution to deforestation and forest degradation. So P4F’s projects work across all forest landscape types and entire market systems. P4F aims to support models that demonstrate that commodity supply chains can protect forests and be profitable whilst delivering positive social impact for local communities. By adopting agroforestry practices and growing climate-smart cocoa on less land, smallholder farmers will be contributing to the global agenda of halting deforestation, decreasing carbon emissions and making the cocoa sector climate-resilient.

The Cocoa & Forest Initiative Roundtable (CFI) Roundtable
At the global level, leading cocoa companies, governments and civil society organisations have made unprecedented public-private commitments and actions to halt deforestation in the cocoa supply chain through the Cocoa & Forests Initiative (CFI), a P4F project, to halt deforestation in the cocoa supply chain. Prince Charles was instrumental in the establishment of the CFI which is a set of public-private actions nested in the national frameworks of Ghana and Côte d'Ivoire – that aim to build a supportive policy environment to produce sustainable cocoa, and secure commitments from major cocoa buyers to align with and support sustainable and climate-smart cocoa.

Business leaders from the cocoa and chocolate industry briefed Prince Charles on specific activities they support in their supply chains and progress made over the past year to implement the joint commitments. The leaders included representatives from Barry Callebaut, Cargill, The Hershey Company, Mars, Wrigley Confectionery, MondelÄ“z International, Nestlé, Olam Cocoa, SIAT Group, and Touton. Representatives from Ghana’s cocoa-farming community, local environmental organizations were also around the table with vital experiences to share.

Victoria Wiafe, WCA Regional Manager of P4F, in her speech updated global leaders on progress so far. She stated that over two years of P4F support, the CFI has expanded from an original 12 private sector signatories to 35, who together with the two national governments of Ghana and Côte d'Ivoire represent an estimated 80+ percent of the global cocoa trade. Both governments have now released their 2018-2020 National Implementation

Plans for operationalizing these commitments, and the 35 CFI participating companies are now finalizing their detailed individual company action plans.
The visit provides an opportune time for us to re-evaluate and take measures to secure the remaining forests in our landscape. We must not lose momentum. Companies and governments should continue to fulfil their commitments to promote a resilient cocoa sector, support smallholder farmers by building their capacity, scale up climate-smart cocoa production, and ensure that cocoa can be tracked to the exact farm location.