Shea butter is a common ingredient in moisturisers, salves, and lotions, and can be found in popular cosmetic outlets such as Body Shop and Ulta Beauty for Western consumers. It’s a fat extracted from the nut of the African shea tree that grows naturally in the savannah of West and East Africa from Senegal to Ethiopia.

In Mali, shea butter is known as karite butter, and COPROKAZAN, a cooperative comprised of 1,560 women and 18 men, produces and sells it.

But since 2017, COPROKAZAN has developed a secondary activity — sales of six social marketing products for Keneya Jemu Kan, or KJK, a project funded by USAID that seeks to reduce maternal, infant, and child mortality in Mali. These products range from water purification tablets to condoms.

The all-female leadership of COPROKAZAN believes the collaboration with KJK has had a significant impact on the health of their communities, as well as improving the quality of their own lives by bringing in extra revenue. 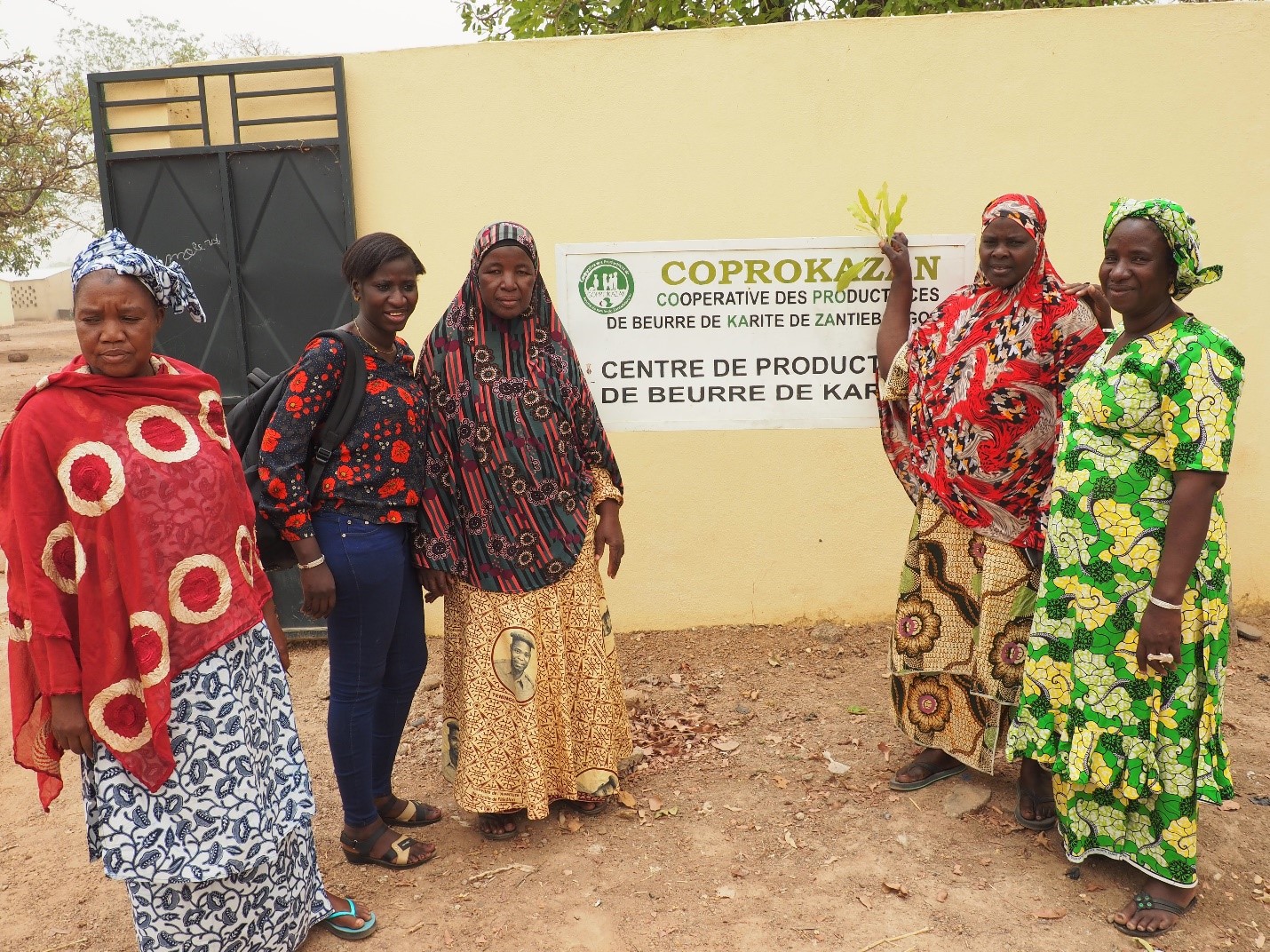 The leadership of COPROKAZAN, a shea butter producers' cooperative in southern Mali, believes their partnership with Keneya Jemu Kan, has had a health impact in their rural areas and brought in extra revenue for the members. Credit: David J. Olson

In the southern Region of Sikasso, they say, people have problems accessing clean water. Traditionally, people have used bleach to disinfect their water, but that’s expensive and people are uncertain about how much to use to disinfect water for drinking and cleaning vegetables.

With Aquatabs, water purification tablets available through KJK, there is no uncertainty — you need one tablet to clean 20 litres of water (20-litre containers are common in Mali). Aquatabs prevent microorganisms that cause cholera, typhoid, dysentery, and other diseases. With Aquatabs, Sikasso has seen important reductions in stomach aches and diarrhoea.

COPROKAZAN members also sell kits of Orasel Zinc, which contain two sachets of strawberry-flavoured oral rehydration salt (ORS) and 10 zinc tablets. Orasel Zinc prevents and treats dehydration caused by diarrhoea. Studies show that zinc in conjunction with ORS can reduce the duration and severity of diarrhoea for up to three months.

The cooperative’s members also focus on family planning. There is a simple calculation of its benefits: “Too many children increase poverty,” one member says. “Less children reduce poverty.” In family planning, they sell male and female condoms, oral contraceptives, and CycleBeads, a natural family planning method. They promote condoms for protection against both pregnancy and sexually transmitted infections.

COPROKAZAN goes into schools in 40 villages to reach young women in sixth to ninth grade to help them avoid unwanted pregnancies and keep their water clean. KJK provides the schools with water cleaning kits, backpacks, T-shirts and shopping bags to promote KJK products.

COPROKAZAN started in Zantiebougou, a small village about two hours southeast of the capital of Bamako, and has expanded to 43 villages. The leaders say they want to expand further.

Since the partnership with KJK began in 2017, the 120 members of COPROKAZAN have:

KJK is also working with five other women’s groups in Bamako and the regions of Kayes, Mopti, and Sikasso, because it has found that women’s groups, particularly those in rural areas like COPROKAZAN, can help “reach the last mile” — those people living in remote or neglected areas beyond the reach of public health clinics or private sector retail outlets.

These are the very people that COPROKAZAN is skilled in reaching.

The KJK project is implemented by the Johns Hopkins Center for Communication Programs in collaboration with Palladium and Management Sciences for Health. Palladium led the social marketing component of KJK until September 2019.