Get inspiration in your inbox
with our monthly newsletter.
SUBSCRIBE
Gabriela Alvarado | Palladium - Apr 08 2019
The "Switzerland" of Guatemala: Kick-Starting Tourism in a Remote Region
in-depth
Share

Huehuetenango’s rugged beauty and vibrant Mayan culture have been preserved in part because of the region’s remoteness in western Guatemala. The Cuchumatanes mountains that form the backbone of the province rise above the land like an island. But this physical isolation, exacerbated by poor infrastructure, has also inhibited economic development in the region and contributed to high migration rates.

In Guatemala, USAID’s Creating Economic Opportunities project is working through the private sector, and with national and local authorities, to strengthen economic growth and generate income and employment, especially for women and youth. One of the strategies to do this is to boost tourism in the region, which last year accounted for only a fraction of the 2.1 million visitors to the country.

“Huehuetenango is our Switzerland,” said Lucrecia Gordillo, head of projects in the planning department of the Guatemalan Tourism Institute (INGUAT).

The project strategy to promote tourism is expansive, and it includes close coordination with INGUAT and a nascent local tourism chamber; promoting access for tourists by renovating the local airport and promoting regularly scheduled flights; and supporting private sector marketing of the region’s many tourist gems on international sites like Expedia.

Discussions among the project team, INGUAT, and the Guatemalan government began early in 2018 and resulted in the re-prioritization of Huehuetenango as a tourist destination. The project also enlisted support from the General Directorate of Civil Aviation to prioritize the renovation of the airport in Huehuetenango. That, with the involvement of local business Camino Mundo Maya, resulted in the first regularly scheduled flights to the city from the capital. Since the inaugural flight on November 19, flights have increased from three weekly roundtrip flights to six, with a maximum of 144 passengers per week. The flight from Guatemala City to Huehuetenango takes less than an hour.

“Working together, having started the flights, and the simple fact that Huehuetenango is being promoted by INGUAT is without a doubt a big step forward,” said Camino Munda Maya President Jorge Granados.

“Being able to overcome the long journey of seven hours [by car] is an opportunity that makes the department accessible for both development and tourism,” added Gordillo. “The aerodrome project was presented as a stimulus to generate jobs and change the vision of the population.” 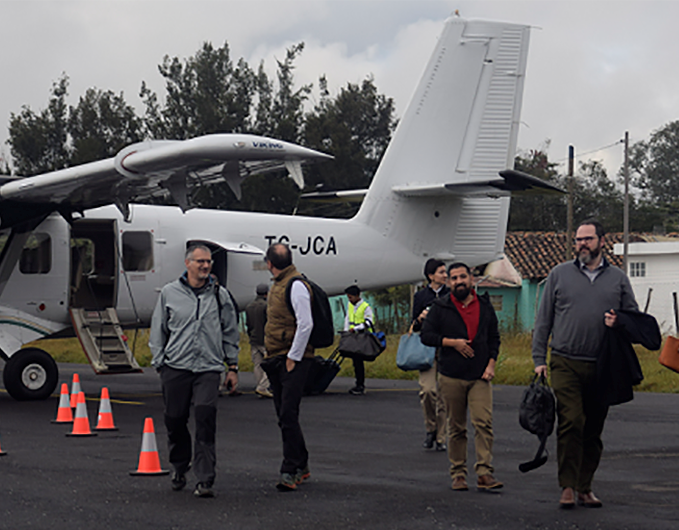 Flights between Guatemala City and Huehuetenango began in November 2018 to facilitate tourism and business, using a Twin Otter 19-seater and a Caravan 12-seater. Source: Marco Mateo/Photo for USAID

The tourism strategy also includes promoting the competitiveness and capacity of an estimated 150 small and medium-sized enterprises in the tourism industry in Huehuetenango. Technical assistance will focus on business organization and structure, marketing, and capacity building in client service delivery.

The renewed alliance and leadership of the Huehuetenango Tourism Chamber is helpful, said Granados. “It brings together hotel and restaurant owners and tour operators who can improve customer service and diversify the services they offer to make Huehuetenango a tourist destination that invites people to stay longer and come back,” he said.

Finally, the Creating Economic Opportunities project is working with Expedia Group, a global online travel platform with more than 675 million visits every month. The project will provide technical assistance and follow-up to put 100 Huehuetenango tourist services and attractions on the platform.

“We believe this is a good platform for us,” said local hotel owner Byron Castañeda. “It gives us greater reach to an international public.”

These project efforts will contribute to Huehuetenango’s economic development, generating an estimated 1,000 new jobs through this coordinated and integrated approach to access, marketing, and capacity building.

“These communities need our support to stem the flow of migration,” said INGUAT’s Gordillo. “Tourism development projects bring development, and that is what we aim for.”

Palladium implements the Creating Economic Opportunities project, which supports the creation of local economic opportunities with the goal of reducing irregular outward migration from the western highlands and Guatemala City.

This article originally appeared on MarketLinks and was republished with permission.