Get inspiration in your inbox
with our monthly newsletter.
SUBSCRIBE
Christina Shim and Holly Ensign-Barstow - May 23 2019
Why It's Illegal for Companies to Invest in Social Impact (And How That's Changing)
in-depth
Share

"Benefit corporations" can legally use profits for positive impact.

Palladium's Christina Shim and B-Lab's Holly Ensign-Barstow take a dive into the U.S. legal history that requires companies to maximise the wealth of their shareholders over investing in long-term positive impact. Register for the Positive Impact Summit on June 25th in New York City to meet the authors.

Many companies today have dual missions: to make a profit (either privately or for their shareholders) and to make a greater positive impact in the world. Yet in some states in the U.S., corporations have a legal obligation to put their shareholders first; if they divert money from dividends into investments – including for social or environmental impact – they could be breaking the law. However, a new business designation opens the door for companies to use profits to invest in long-term positive impact while still paying its shareholders and making a profit.

In the Beginning: Ford and Shareholder Primacy

To best understand how this works, let's begin in the year 1919, when Ford Motor Company was sitting on a surplus of USD 60 million (modern day equivalent USD 870.89 million). The automaker's president, Henry Ford, wanted to restrict dividend payments to shareholders and, instead, build more affordable cars and pay his workers higher wages. Ford was quoted in interviews saying that his decision to build the factory was about doing "as much good as we can, everywhere, for everybody concerned . . . and incidentally to make money."

However, two minority investors, John and Horace Dodge, holding a combined total of 10% of the company, brought a lawsuit against Ford. They claimed that he was using his control over the company to restrict dividend payments even though the company was enormously profitable and could afford to pay large dividends to its shareholders.

This case made its way to the Michigan State Supreme Court, which agreed with the Dodge brothers that Ford had no right to use shareholders' money to achieve his personal goal. The Court ordered Ford to pay a large dividend and reinvest in the construction of the factory. This decision in Dodge v. Ford Motor Company (1919) established the modern-day concept of shareholder primacy.

The state of Delaware took shareholder primacy one step further in the court case Revlon, Inc. v. MacAndrews & Forbes Holdings, Inc. (1986). The court ruled that during mergers and acquisitions, the corporation must pursue a transaction that will maximise the immediate value of their shares. This Revlon Rule means that at the time of sale, the company must prioritise the upcoming quarter's numbers rather than looking towards its long-term health, with the board being held liable if this doctrine is not enforced. This means companies cannot focus on multiyear goals like improving quality of life for stakeholders or minimising their effects on climate change if those decisions have a negative impact on current shareholders.

The case of eBay Domestic Holdings Inc. v. Newmark (2010), also in Delaware, is the most recent review of shareholder primacy. In this case, eBay had acquired 28.4% ownership of Craigslist and gained a seat on its Board, but was unsatisfied that the Craigslist founders, Craig Newmark and Jim Buckmaster, weren't capitalising on their site as much as they could. EBay founded a competing platform, Kijiji, which incensed Craigslist that its own shareholders were engaged in directly competitive activities.

The founders of Craigslist decided to re-charter Craigslist, diluting eBay's shares down to 24.85%. The dilution lost eBay its seat on the Board and included a provision that deterred eBay from selling its minority stake to anyone other than the founders or Craigslist.

The judge ruled that the Craigslist founders violated their fiduciary duty when they re-chartered because the express purpose was punishing the minority stakeholder, not financial gain. In the judge’s own words:

"The corporate form in which Craigslist operates… is not an appropriate vehicle for purely philanthropic ends, at least not when there are other stockholders interested in realizing a return on their investment. Jim and Craig opted to form Craigslist, Inc. as a for-profit Delaware corporation and voluntarily accepted millions of dollars from eBay as part of a transaction whereby eBay became a stockholder. Having chosen a for-profit corporate form, the Craigslist directors are bound by the fiduciary duties and standards that accompany that form. Those standards include acting to promote the value of the corporation for the benefit of its stockholders."

The Revlon Rule and the ruling in eBay vs. Craigslist make it clear that the American legal system prioritises a company's financial responsibilities to its shareholders above all else. For-profit corporations, particularly those incorporated in Delaware, are beholden to wealth maximisation.

Today in the U.S., there are 35 states and the District of Columbia that are allowing the establishment of the business designation of "benefit corporations". Traditional, for-profit companies are required to comply with stakeholder primacy. However, benefit corporations allow for-profit companies to "create a material and positive impact on society and the environment" all while continuing to operate profitably. They can promote social and environmental causes without being liable for lawsuits accusing these efforts of diluting the value of holding stocks in that company.

Any corporation can become a benefit corporation by stating in its charter or articles that it is a benefit corporation and gaining approval through a super majority vote among shareholders. However, the key difference between traditional and benefit corporations is that in the latter, the company's directors and officers are required to consider the impact of their decisions not only on shareholders but also on employees, customers, the community, and the local and global environment. The only downsides appear to be increased public reporting requirements as well as, in some states, the establishment of a "third party standard" for assessing overall performance with regards to these social and environmental metrics. Other states are even more flexible and allow you to choose your own metrics, while the third party standard must be credible, comprehensive, transparent and independent.

Patagonia registered as a benefit corporation in 2012, and while they are still a privately-owned corporation without any outside investors, the designation protects it if it ever chooses to go public or bring on outside investors. In fact, a small but growing number of companies have adopted this legal standard, including Kickstarter, Danone (North America subsidiary), Change.org, and Allbirds.

An alternative is to link a company's social impact directly to their business results, which requires that they move beyond CSR and reimagine their core company strategy. Companies who go this route need to think big, looking at the entire ecosystem in which they operate, and building sustainability right into their business model. It takes collaboration with stakeholders across the value chain, innovative sources of capital, and an effective governance framework that keeps everyone aligned, but by linking social progress with commercial growth, both stand to benefit, creating something greater than the sum of its parts.

In all cases, the "benefit corporation" designation gives companies leeway to pursue broader social and environmental initiatives that promote the corporation’s long-term longevity, rather than sacrificing sustainability and impact to shareholder wealth. 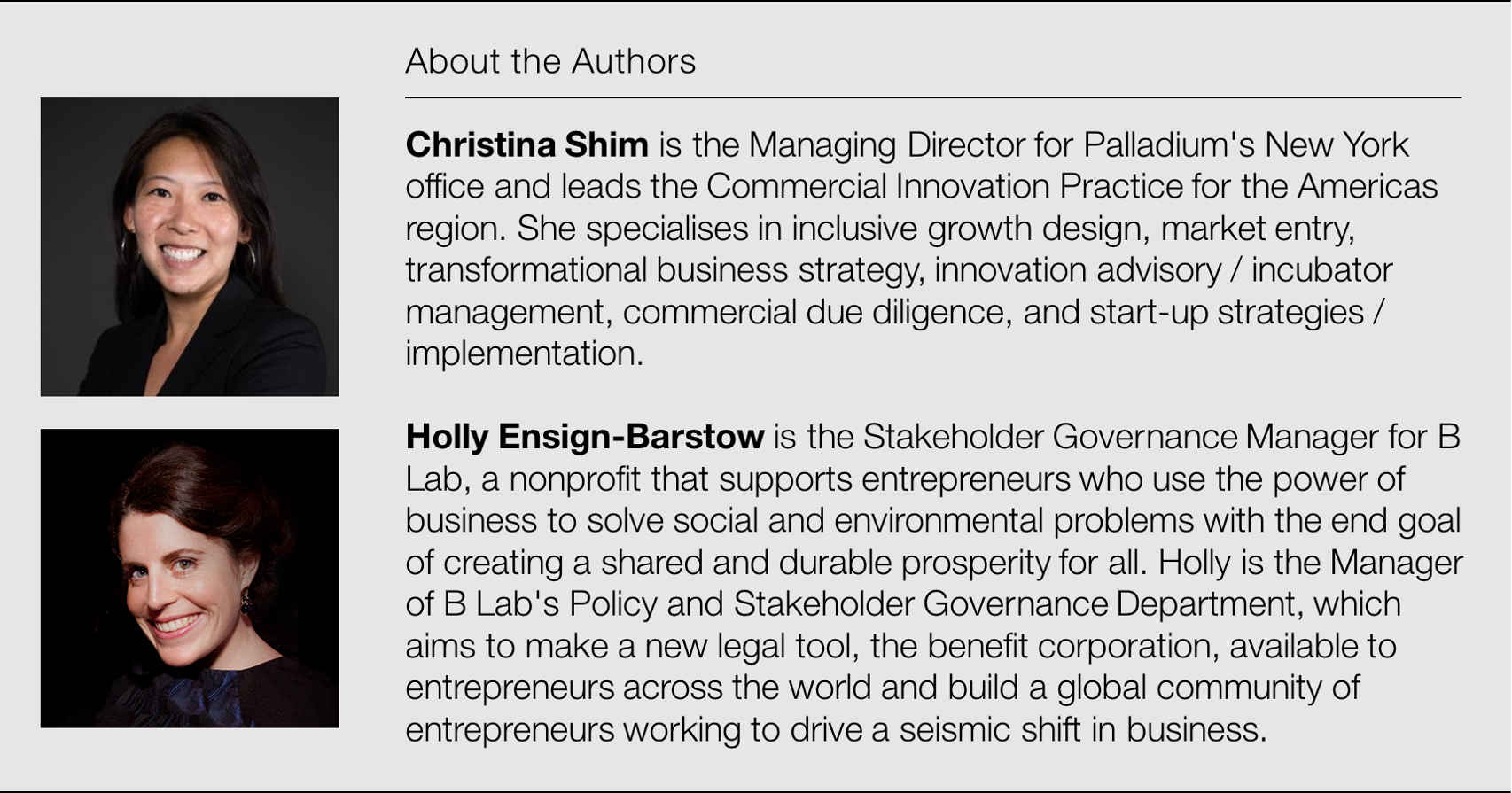