Get inspiration in your inbox
with our monthly newsletter.
SUBSCRIBE
Elizabeth Godo | Palladium - Sep 17 2018
From Cyclone to Wheels Up in 2 Hours: Behind the Scenes of Australia's Emergency Response
In-depth
Share

When natural disasters strike, getting supplies and relief on the ground quickly can mean the difference between life and death. As the world braces itself for peak storm season, Palladium's Matt Everitt describes how his team stays ready to respond, in partnership with Australia's Department of Foreign Affairs and Trade (DFAT) and the Australian Defence Force (ADF).

Before the Storm: Tracking and Planning

In the Pacific, natural disasters are the most common threat, including cyclones, earthquakes, and volcanoes. In between disasters, the team is scanning, anticipating, and planning for the next possible emergency.

“We create response scenarios and work closely with the ADF, DFAT and other partners on potential response plans, so we can be prepared for any possibility.”

The team also maintains a roster of responders made up of nine different skill sets, from pilots to information management professionals to ship brokers, and keeps those individuals up to date so that everyone is ready in case they’re called on to respond.

Peter Diplas, Logistics Partner based in Sydney, Australia, has been doing this for over 20 years. “You can tell a lot about the character of a responder when they turn up to a briefing with their passport in hand, ready to jump on a plane if they have to,” he says. 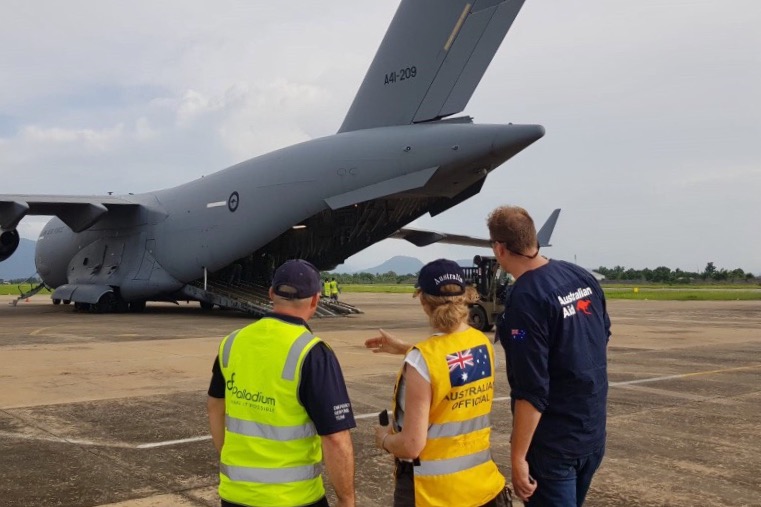 Responding to floods in Laos, July 2018

All the while, the team communicates and coordinates with DFAT and international and local partners, sharing ideas for the most efficient and effective way to get help to those who need it.

During the Storm: Pre-Positioning

Once the likelihood of an emergency increases, the team starts to pre-position.

“We keep extensive networks of in-country agents, local organisations, and NGOs who understand local contexts, cultures, and what communities will need,” Matt explains.

“We pull out a list of hotels in every country in the Pacific with their own generators, and book rooms in advance.”

The team even pre-positions DFAT’s supplies, stored in Palladium’s warehouses, and readies them for transport. This includes emergency power, shelter, and water, sanitation, and hygiene kits.

Even if disaster doesn’t strike, the response is ready to go.

After the Storm: Mobilising the Response

Following a natural disaster in the Pacific, a humanitarian emergency response doesn’t happen automatically. When a ‘trigger event’ overwhelms local capacity, the government of the affected country must ask the Australian Government for assistance, and Australia must approve the plan the wider team has put in place. As soon as that’s happened, DFAT calls upon Palladium to join them and the Australian Defence Force to mobilise.

Matt describes the case of Cyclone Gita earlier this year: “We made our best guess about where it was likely to hit. When the cyclone came, we were ready to fly out around the storm, and were the first country to respond.”

“At its simplest, humanitarian emergency response is about logistics – getting something from one place to another. From the time DFAT approves the decision to respond, the team has supply lines mapped, pallets of supplies ready to load on C-17 military planes, and wheels up headed toward the disaster within two hours.”

Palladium has been providing logistical support for the Australian Government’s humanitarian relief efforts since 1987 including responding on the ground to some of the biggest disasters in the Pacific. Contact Matt Everitt for more information.