Propcom works across Nigeria to reduce poverty by creating links between the private sector and government players, while piloting new ways of doing business. 665,000 poor farmers and small-scale rural entrepreneurs have seen their incomes increase by a total of £27 million as a result of the programme’s work. And £49 million has been leveraged in investments from the private sector into the rural economy.

"Propcom has been able to help hundreds of thousands of people, despite working in a very difficult environment," said Propcom's Technical Director Rip Kirby, when asked why the programme was selected for Prince Charles' visit. "In addition, we are working to increase resilience to the effects of climate change, which are felt acutely by poor rural communities in the country."

Prince Charles performed a ceremonial vaccination of chickens against Newcastle disease during his visit. The disease kills tens of millions of chickens every year. Chickens are a vital source of income for the poor, particularly for women. While large-scale farmers can immunise their poultry against the disease, many poor women are either not aware of the vaccine or simply have no way to buy it. Additionally, vaccine distributors have not made an effort to reach remote and poor communities, largely because they do not believe that the poor will pay for the vaccines, but also because they believe that only veterinarians can administer the vaccines.

Through Propcom, a vaccine is now being sold to rural farmers, most of them women, who for the first time have the option to protect their chickens. The programme has demonstrated that reaching the poor can be viable as long as distributors reconsider their approach to selling the vaccine. Key to this is an innovative model where community members are trained to vaccinate the chickens themselves. The trainees buy a vaccination kit from the distributors and travel from village to village and door to door, explaining the benefits of the vaccine. They then provide vaccinations services to other farmers for a fee.

Some of these newly trained vaccinators supplement other sources of income with this work. Isa Musa is a village school cleaner whose income increased by 35% when he became a vaccinator. "I'm very happy about this extra income," he said. "I use the money I make from vaccination for my family’s day-to-day needs, while waiting for my salary, which is sometimes delayed."

Over 40,000 smallholder farmers are now seeking vaccination services, and farmers' incomes have increased by over £3.4 million thanks to the vaccines.
"Ever since Enoch [a vaccinator] has been visiting my house to vaccinate my chickens, I have not lost any to Newcastle disease. I now have more than 60 chickens and my savings have increased," explained Rose Solomon, a farmer from Plateau State.

Linking to the Private Sector – and New Markets 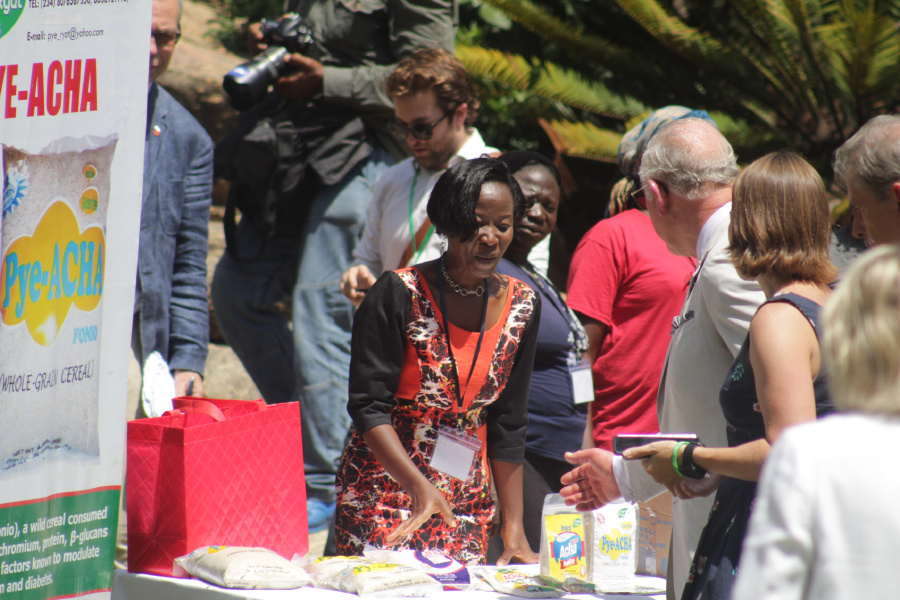 During his visit, the Prince met with women who are being supported by Propcom to make a better living from acha (or fonio), a cereal crop grown in parts of West Africa which is a traditional food for many communities.

Acha has been called "the next Quinoa" due to its high nutrient content. But acha production is currently in decline. Manual processing of the small grains is extremely labour-intensive. As Change Mann, a farmer from Plateau State, explained, "The problem for us is that acha is very hard to process. It is time consuming and requires a lot of labour. It takes me four days to dehull and winnow a 50kg bag of acha. Washing, destoning, and drying takes me another day. It is difficult to do all this with other demands."

Machine processing is much more efficient than manual processing. But small scale acha producers can’t afford these machines. Propcom has helped solve this challenge by finding a Nigerian company, Pye Ryat, that makes acha processing machines.. Together, Propcom and Pye Ryat developed a strategy to provide processing services to producers in rural communities. The service has already been used by thousands of farmers.

"I first used the machine service in January 2016," Change said. "I was very surprised at how quickly it did the job. The machines takes about 40 minutes to dehull, destone and winnow the same quantity of acha that previously took me four days to complete."

Propcom has also supported Pye Ryat in seeking investors to scale up their commercial processing operation. The acha that is processed by Pye Ryat’s machines is free from sand, a major constraint to selling manually processed acha to the formal market. The grain, which is mostly used for making porridge and biscuits, is now to be found in supermarkets in Nigeria’s urban centres. Pye Ryat is also currently fulfilling an export order to the USA.

At the demonstration event, Prince Charles even asked to take some acha home with him.